Some days it feels like he’s been with us forever and others I still forget he’s here. He is such a different baby than H was, and is a really easy baby for the most part. He sleeps through all of H’s tantrums and craziness and is just a pretty laid back little one overall.

He is all cheeks and chins, and has the greatest little back, arm, and thigh rolls starting! He is starting to be alert for more hours of the day, but would rather be sleeping, regardless. Because they’re always closed it’s been hard to get a good picture, but he has the most beautiful grey-blue eyes, and his brow is starting to get the same furrow that H had. His hair is easily what he gets complimented the most on – it’s a deep deep brown, but the tips almost look like they’ve been highlighted a light caramel color, it’s so cool and so very 90s!

In case you can’t tell by his weight gain, his two favorite things on this Earth right now are my boobs. And sleep. Even better? All of the above at once! He is also totally enamored with our ceiling fan and when his older brother sings to him (which also just so happens to melt my heart). Our dog Clyde is happy to have another little new wriggly thing that smells in our home, and has become quite protective (in a totally harmless way) over J. Whenever I can manage to put J down on the couch or in one of his chairs, Clyde will make his way over and hunker down right next to him.

He literally eats all day every day and is happiest nuzzled on my chest (in case you can’t tell by all the pictures). When my pediatrician and midwife ask me how long we’re averaging in between feeds, I just have to laugh, because I literally have no clue – like maybe 20 minutes? Thank goodness breastfeeding has been so much easier this time around, and he has a great latch!

Sleep is awesome with this kid. Knock on wood, but so far he’s just like his brother in that aspect! I set an alarm to wake him up every 3.5-4 hours at night to change his diaper and to breastfeed him, but other than that, J just wants to catch some Zzzs and snuggle. We are cosleeping right now, which is why we upgraded to a King bed, which makes for really easy nighttime feeds for me!

We had to pack away the newborn clothing and diapers around 2 weeks, and he’s currently rocking 3-month clothes and size 1 diapers (although the size 1s are starting to get really tight around his thighs…). His head is ginormous just like brothers, so he’s in 6 month plus size hatsWe’re using disposables for him right now since the cloth diapers are packed up, but I’ll be excited to start using them again! I almost forgot how many diapers a baby goes through, and it still kind of hurts my crunchy heart to put so much extra waste into our trashcans.

I’m so glad we’re still living so close to my parents and brother, as they’ve gotten to see and cuddle J really often. My dad is convinced that J is way smaller than H was at this age, but when I got out old pictures to compare, J is actually quite heavier! At one month, H was 11 pounds and 23 inches, but J is well over 12.5 pounds, so it’ll be interesting to see if he keeps this up since H was so chunky and had the most insane rolls.

Hubby has been traveling a ton for work, so thank goodness for family close by to come and help out! His mom flew down for a long weekend when he went out of town, and I’m glad she got to have someone on one time with J, and get some of those good newborn snuggles in. Now that he’s working from home, for the most part, I think it’s been really interesting for him to get to experience the newborn phase since he was working 12-15 hour days for the first several months of H’s life. I think he’ll be happy when J starts going a little longer in between feeds, though, because as soon as I try to pass him off to dad so he can get some time in and give me a break to get some work done (HA!), J tends to wake up and starts rooting around for the boob, and then gets frustrated when the person holding him doesn’t lactate.

H is totally enamored with his new brother. He loves helping me change his diapers, and always asks if he can hold him and snuggle him, and loves to give J knuckles and high fives and kisses before naps and every night before bed. We were so worried how H would handle the transition of becoming a big brother and having to share me with another little human being, but we’ve been amazed at how well he does with J! There is definitely some jealousy when J is on one of his marathon nursing sessions, but even then, H just wants to come over and pet J’s hair and tell me how J is drinking his milk so he can “grow big and strong like me”, which is super adorable.

We have so much coming up in the next few months, November especially, so I hope he maintains his calm and cool collectedness and continues to balance out H’s crazy toddler-ness!

If you haven’t already, make sure to check out our “Fresh 48 Lifestyle Photoshoot” done by ShutterHappy Photography to get to see pictures that weren’t taken by a sleep deprived, iPhone wielding mombie! 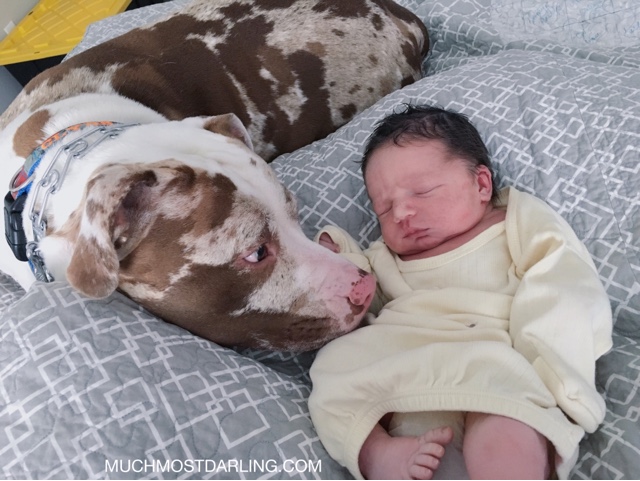 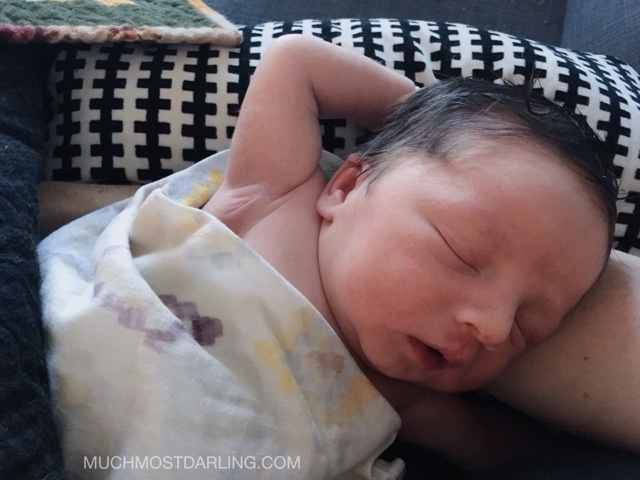 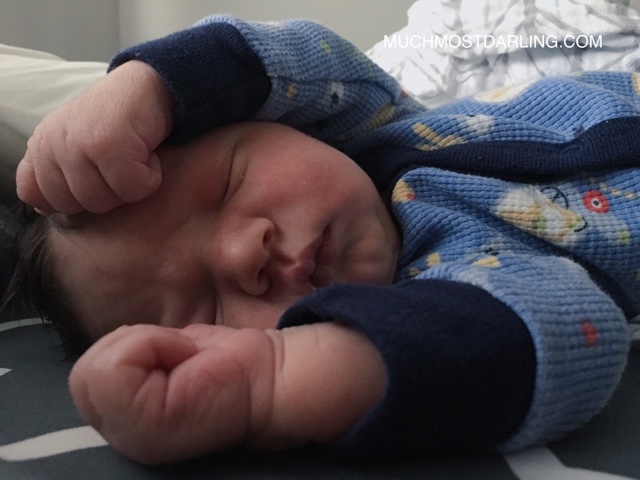 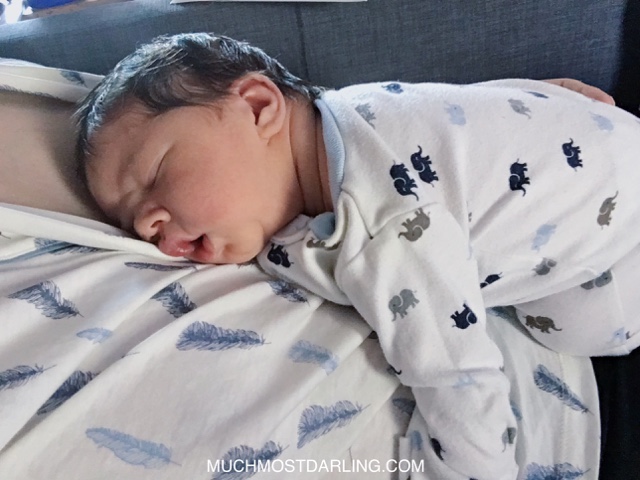 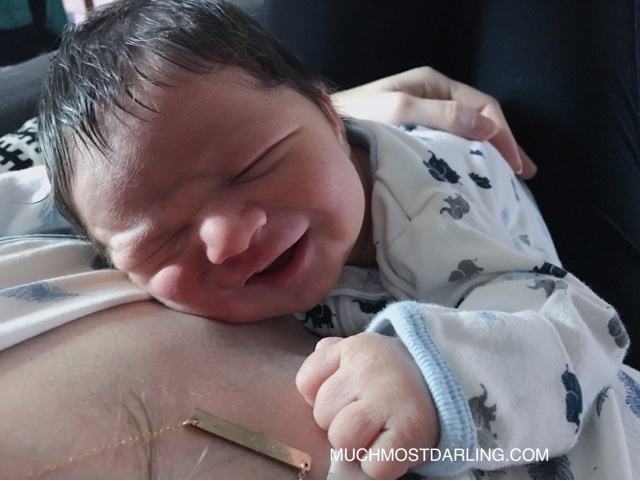 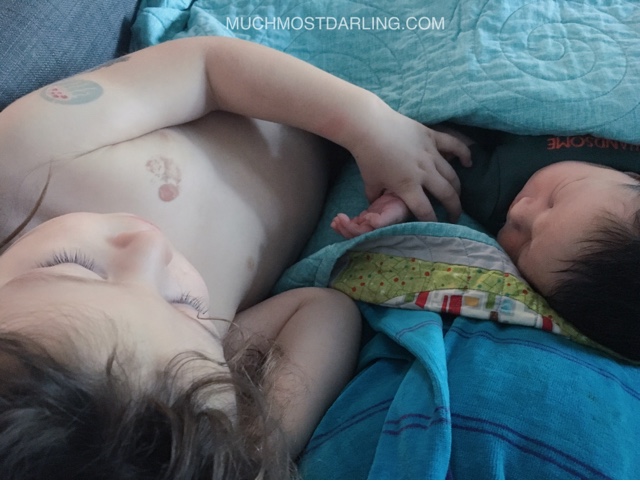 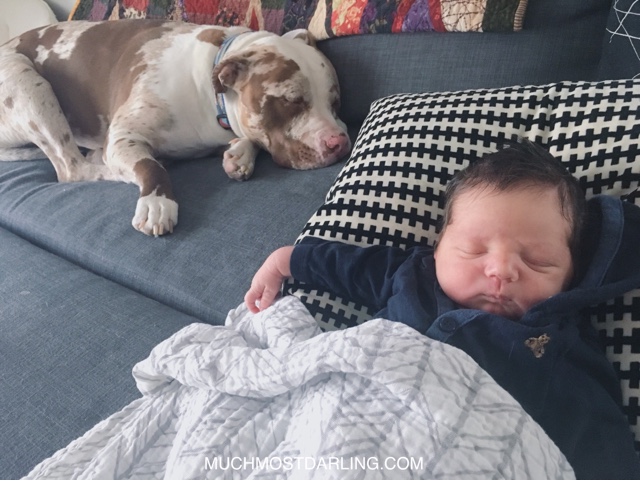 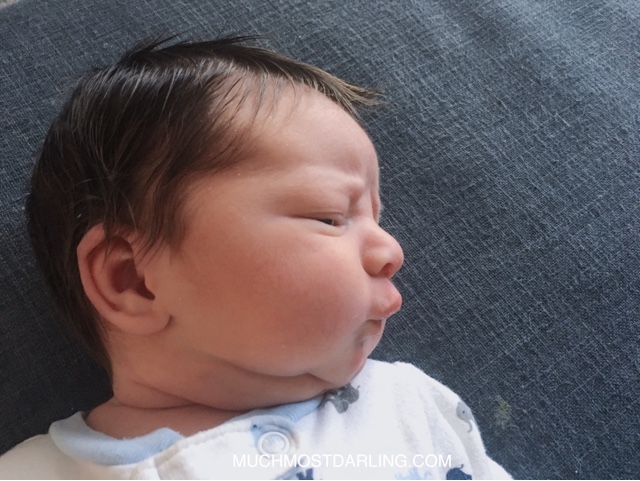 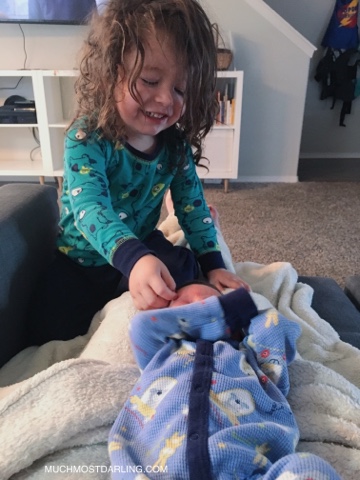 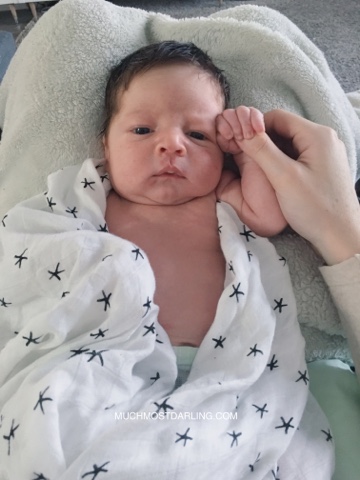 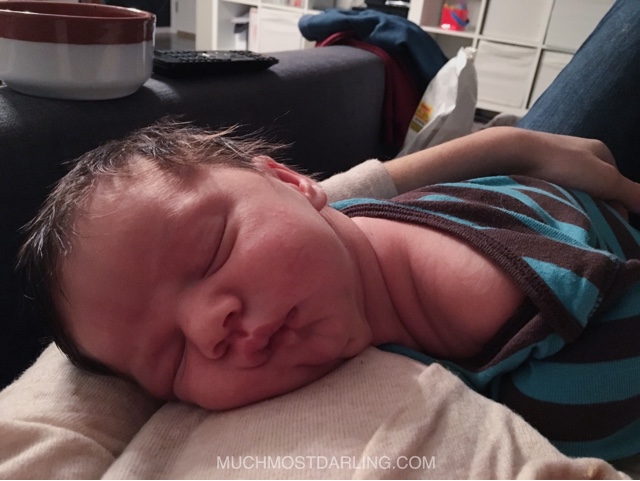 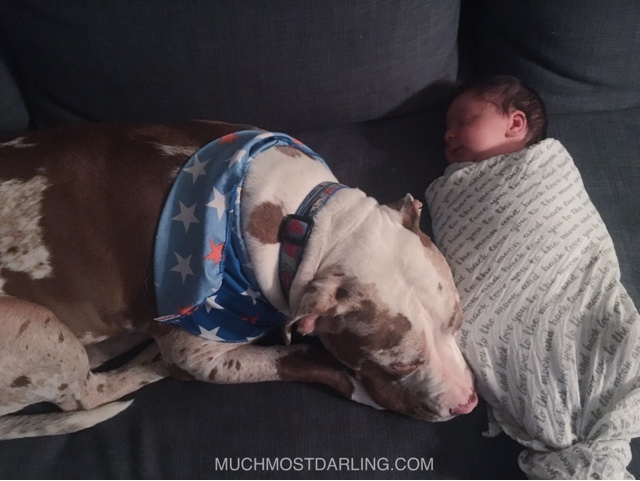 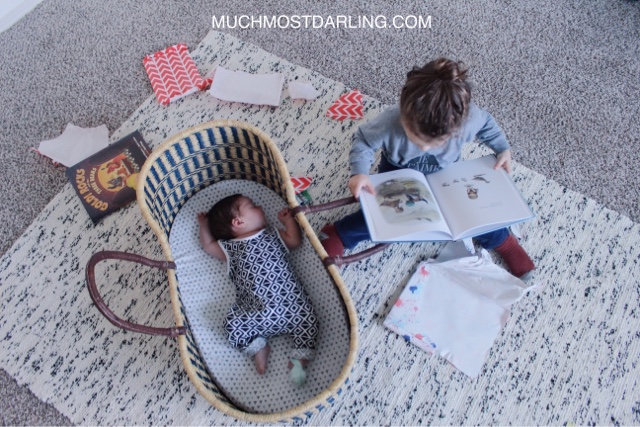 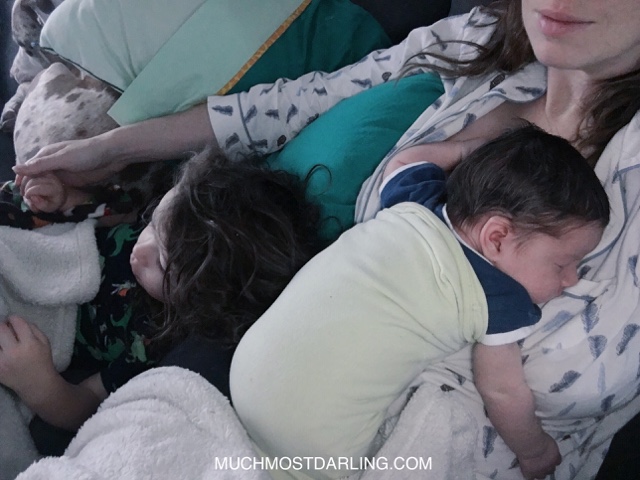 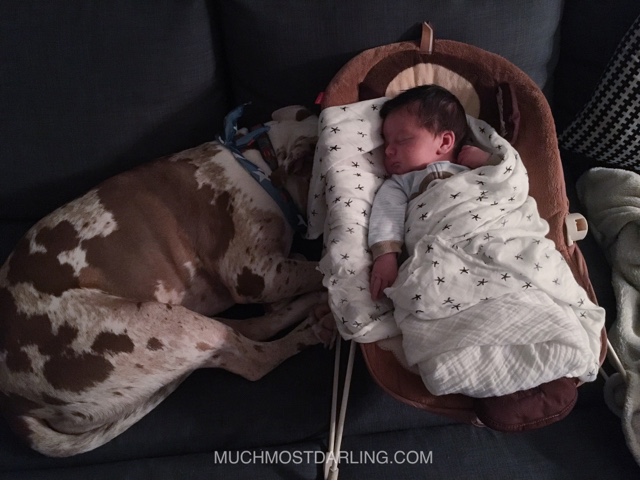 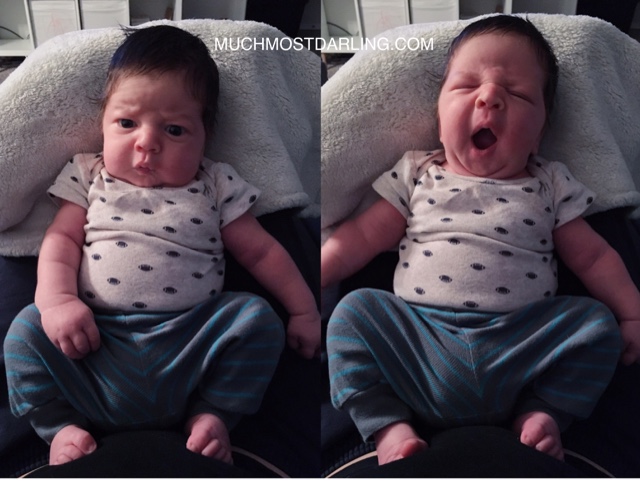 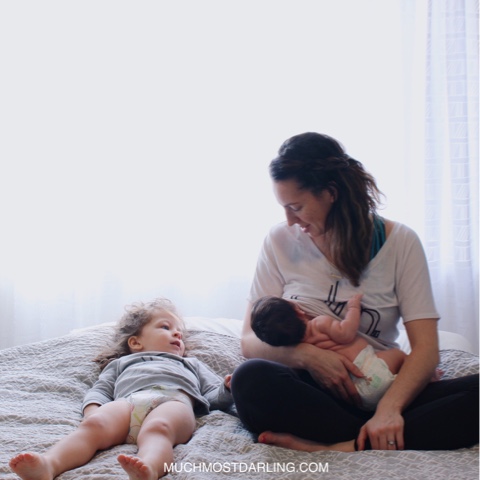 Is the Nested Bean Sleep Sack Worth it? A Zen Sack Review

The Best Bathtub for Your Baby, Especially When You Have No Space

7 of the best pregnancy apps for dads / partners

Bonding with baby: 8 simple things that helped me bond with my kids.

I'm a coffee loving sometimes-blogger, wife, and stay at home mom to an almost 4 year old tornado of a toddler and chunky one year old boy! I share my honest motherhood moments, favorite family goodies, and the helpful hints I've discovered through my journey and with the aid of my 'tribe'.